5 Major Accidents in the History of Indian Railways

5 Major Accidents in the History of Indian Railways

No matter how well you prepare yourself to meet unprecedented emergencies, news of an accident is always overwhelming and dreaded. Train accidents are no exceptions when it comes to the shock and trauma that follows. What renders them truly disturbing is the fact that often the accident is a result of gross negligence and could have been avoided by practicing basic vigilance.

That being said, the essence of human race is to learn from past mistakes and one of the ways of doing so entails being aware of the worst. With the intention of creating awareness for avoiding such disasters in future, compiled as follows is a list of some of the worst train disasters in the history of Indian Railways –

Little did the passengers of Patna-Indore Express know the fated that awaited them when they boarded the train hoping that it would soon take them to their destinations. It was just before the break of dawn – about three in the morning – when 14 bogies packed with commuters simply slid off the rail tracks, thus wreaking havoc.

What rendered the derailment truly destructive was the time of its occurrence and the fact that the area which the train was crossing, namely Pukhrayan, is sparsely populated. Courtesy of the combination of these two factors, the death toll mounted up to 97 with the forecast that this number could go up further and the list of injured had at least 150 names.

On the morning of 30 th July, 2012, as the Tamil Nadu Express that connects New Delhi with Chennai was nearing Nellore (Andhra Pradesh), one of its coaches was engulfed in flames. The coach was later identified as S – 11 and it was a little past 4 in the morning that a gateman at one of the railway crossings observed smoke and flames ensuing.

At the time of the incident there were 72 passengers in the coach and about 6 unreserved commuters. Of these, only 35 could make it to the safety of outdoor and seek medical help while the rest were engulfed by the flames. Thanks to the efforts of the emergency team, the coach was quickly detached from the rest of the train to prevent the fire from spreading to other coaches.

While the Howrah-Delhi Kalka Mail was crossing the Fatehpur District, Uttar Pradesh, is its race towards Delhi on Sunday, 10 th July, 2011, it suffered derailment wherein at least 35 people were killed and 200 sustained major injuries. The speed of the train at that time was 108 km/hour and this was cited as a reason for 15 of its coaches getting derailed, thus leading to what turned out to be the worst rail accident of the year 2011.

The fact that Indian Railways too has borne the brunt of militancy in India becomes totally apparent through this rail accident wherein the Howrah-Kurla Gyaneshwari Express was attacked by Naxal rebels. 170 people were estimated to have lost their lives in an explosion that caused derailment and eventual clash with a passing goods train. When the accident took place, it was 1.30 am and the train was heading towards Sardiha in West Midnapore district. 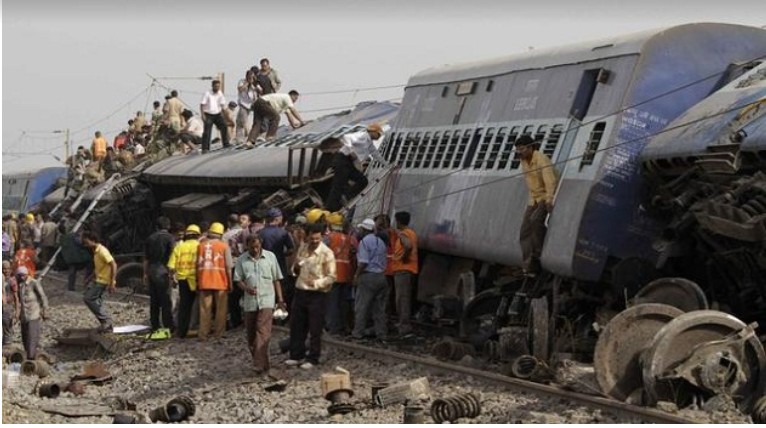